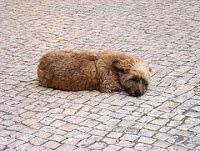 This is a very sad and overlooked consequence of the subprime lending scandals.

Authorities around the country in recent months have reported numerous findings of cats, dogs, birds, horses and other animals at foreclosed houses and farms. Among the more notorious cases, animals were found in large number -- three dogs and 20 birds in a house in Lorain, Ohio; 24 horses on a farm in Bixby, Okla.; and 63 cats in a house in Cincinnati. It was too late when authorities got to a foreclosed house in Bradford, Pa., to discover the bodies of 21 Great Danes. The owner on Thursday pleaded guilty to 21 counts of animal cruelty....

With these numbers in mind, the Humane Society of the United States issued a public statement this month that it's worried about the situation.

"This isn't the first time we've seen people abandoning their pets; it's a problem throughout the year, when people move and can't take their pets," said Stephanie Shain, director of outreach for the Washington-based humane group. "But with this increase in foreclosures, we're going to see more of it."