Greenpeace Drives Whalers out of Antarctrica 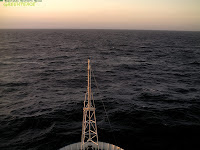 According to Greenpeace, the factory ship Nisshin Maru has fled past 60 degrees latitude taking it out of Antarctic waters for now.

Greenpeace have claimed to have driven Japan's controversial whaling fleet out of Antarctic hunting grounds after a dramatic, 24 hour chase through thick fog and rough seas.

The Greenpeace ship Esperanza located the six Japanese whalers on Saturday after 10 days of scouring the icy reaches of the Southern Ocean.

The environmental group plans to harass the fleet and disrupt its plan to kill nearly 1,000 minke and fin whales by placing volunteers in inflatable boats between the whales and the whalers' harpoon guns.

After confronting the fleet, the Esperanza pursued the main factory ship, the Nisshin Maru, until it crossed the 60 degrees latitude boundary - the limit to southern whale hunting grounds.

According to Paul Watson of Sea Shepherd, they are not far behind as well.