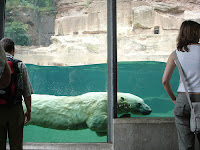 What the hell is up with that? The mother, living in her unnatural environment, is neglecting the cubs, so they decide to get all Darwinian.

Three tiny polar bear cubs are being allowed to starve to death after a zoo took the controversial decision not to rear them by hand if their mother continued to neglect them.

Mother bears Vera and Wilma gave birth three weeks and five weeks ago at Nuremberg Zoo in southern Germany. It is thought they have six cubs between them. Wilma is displaying the signs of being a good mother, but Vera shows no interest in her young.

She frequently strolls out of her cave, where the hungry cries of her babies can be heard from within, and she lazes for hours outside her lair.

So instead of stepping in and hand feeding them, they're going to let them starve. Deputy zoo director won't intervene because it will allegedly intervene with Vera's parenting practice. Starve those baby bears! That will teach her! More likely, she just won't care. So the bear cubs die a gruesome suffering death for no reason.

I am disgusted to learn that Nuremberg zoo will let those 3 baby polar bears starve to death because their mother won't feed them. How can Mr. Maegdefrau justify this decision by saying that " in nature if something goes wrong, it goes wrong " when zoos are far from being a natural environment for these animals. If the cubs die, they will be taken away from their mother anyway, why can't they be taken from her before this happens? Your actions aren't cruel, they are barbaric!!!!!

I agree with Wolf. It's ridiculous. Maegdefrau needs to act now. Polar bears are a threatened species with global warming for starters, but secondly, it's NOT a natural environment a zoo, so don't let "nature take it's course" save the poor creatures from a slow, and terrifying death. Raise them by hand, what's the difference, they'll forever be kept in a zoo if Vera fed them!! It's inhumane.
What can be done here? why is it his decision.... can't somebody else step in????? Please??????

I agree wholeheartedly with the previous posters who have summed it up really.

Nuremberg Zoo is a far cry from the polar bears' natural environment. So are there any other reasons to justify what otherwise seems to be a cruel and senseless decision?!

I am absolutely disgusted by this. What sort of man lets three tiny bears die, when they are supposed to care for their animals??? This is a zoo, its not in the wild and something can be done about it! Can't somebody do something about this??????? How would he like to be starved to death himself..

What does the public think of a petition being started to pass a law that the zookeeper starve to death instead of the polar cubs? Isnt this guy a pure monster? Isnt this cruelty to animals of the worst possible kind? Is jail too good for him? Should he suffer the punishment he is inflicting upon poor innocent creatures?

My children and I are horrified to learn that Nuremberg Zoo are prepared to let these 3 cubs suffer a terrible death. Stop this insanity now and save these beautiful creatures and help protect and already endangered species. After all Zoos are supposed to be caring environments that are there to protect all the animals that they have in their care. Would you let 3 human babies starve to death if their mother was neglecting them? No! They would be taken in to care. I rest my case.

I definitely agree with the previous posters. They are absolutely dispicable. It is disgusting. Why can't they feed them? Could someone not raise a campaign, but I heard that they were dead. I don't understand they could leave poor, hungry, defenceless animals to die. I wholeheartedly agree to a petition though, and will attempt to get one going. I may not be able to though, as I live in England and am not sure how to get it to Nuremberg, but I will definitely try.

How tragic in this day and age! Aren't there any animal cruelty laws in Germany that can be enforced to stop this senseless act? This isn't 3 cubs starving to death in nature! They're starving to death in a manmade environment bereft of any food whatsoever - nothing to forage, not even a fish in the water!

Nature cannot take it's course when this isn't nature or a natural habitat!

It's nature for evolved humans to throw a starving animal something to eat if they have it!

Letting them starve contradicts the purpose of zoos to protect and expand knowledge of a species! This action cannot justify the existence of the zoo!

Too late now. Looks like they let them die.

This whole issue is just ridiculous. Their argument is absurd, polar bears do not belong in Germany, much less in an enclosed, artificial, non natural environment. The polar bears were placed there by humans in the first place, evidently, it is their moral duty to foster and care for these animals in the best way possible. This is pure abandonment and in my view it is a crime.

They did this in hopes to avoid the furor caused by the Knut incident at the Berlin Zoo. However, I fear that the way they chose to deal with this has actually created a much serious quagmire for themselves which, sadly, may result in the unfair death of some of the most endangered animals on earth. This Zoo is clearly being run by a group imbeciles, there needs to be some accountability and I hope that justice is served.