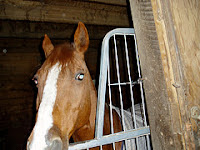 It's a dirty little secret in Britain that horses are being slaughtered there for human consumption. You won't find locations of horse slaughterhouses on the Food Standards Agency's web site, although slaughterhouses for other animals are identified.

...the Government refuses to advertise the location of horse abattoirs and...the abattoirs themselves are none to keen on publicising this particular speciality.

Whenever they have in the past, they have found themselves targeted by animal rights activists who have fought an aggressive campaign to have the trade outlawed....

Andrew Tyler, the director of Animal Aid, the country's largest animal rights group, claims that every year more than 2,000 unwanted racehorses are killed for meat in this way.

"The figures we have assembled suggest that there are 17,000 thoroughbreds born each year and only about 5,000 make it to race," he says.

Horses must be slaughtered in Britain because the live export of horses for meat is banned. This prevents them from suffering the transport conditions other animals are subjected to in Europe. However, the horsemeat export from the UK is growing.

We currently source about 5 per cent of our meat from Britain," a Paris horsemeat dealer told me. "This figure amounts to around 89 tons of meat a year, but it is growing.

"Imports from Belgium, South America, the U.S. and Canada are all strong, but Britain is catching up."

Photo by RainPacket.
Posted by Ana at 5:09 PM

I totally agree that the idea of horses going to slaughter is unpalateable, but surely it is far better that these animals are killed fairly close to home (there is an abbatoir in the north and one in the west) than sent through the markets to end up right at the bottom of the horse trade with people like the man in Amersham. Sometimes it is a lot kinder to have a horse shot.