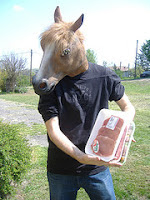 Now that the US has stopped slaughtering its horses for meat, they are being shipped to Canada and Mexico instead. This development has spurred a debate in Canada over whether the practice should be banned there too.

On the one hand, you have the animal rights people with some celebrity help from Bo Derek and Willie Nelson. Then you've got the slaughterhouse advocates who argue the same old refrain...jobs, jobs, jobs.

Slaughter plant owners in Canada...bristle at suggestions their practices are unethical and are wary of attempts to draw the horsemeat business into the public eye.

They argue the international market for horsemeat is good business and creates valuable jobs.

"These people have a lot of money and a lot of time, and they create a lot of trouble," said Ken Piller, president of Natural Valley Meats in Saskatchewan.

Horse-slaughtering is definitely pulling in the dollars from the European market.

According to Statistics Canada, nearly $70-million worth of horsemeat was shipped to Canada's top 10 export countries in 2007, an increase of 20% over 2006. (The biggest buyers were France, Japan and Switzerland).

Photo by Pacific Matt.
Posted by Ana at 7:16 PM