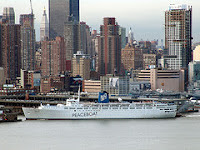 We come down really hard on the Japanese government (with good reason!) and it's easy to assume that the government is merely following the will of the people. But that may not be true according to this interesting article on Japanese citizens OPPOSING their country's whaling activities.

Some 1,000 Japanese passengers aboard the "Peace Boat" blasted Japan's government for pandering to ultranationalists and ignoring Japanese public opinion.

"The fact our government is killing whales in the name of so-called 'scientific' research is very hard for us to accept and believe," said Peace Boat voyage director Nao Inoue.

Japan's pro-whaling constituency is comprised of ultranationalists, racists, extreme right-wing neo-cons who control Japan's ruling LDP party and the small, but politically powerful fishing industry, which has been in decline for decades after the government turned a blind eye to overfishing that led to the collapse of Japan's coastal fish stocks.

Keep reading the article for an interesting view of "democracy" in Japan.

Photo by NJ Photographer.
Posted by Ana at 5:51 PM