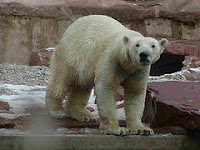 What a terrible story this has become. All this because the zoo's director wanted to avoid "Knutomania," the frenzy over a little guy at the Berlin Zoo (who, regardless of what one believes, is bringing in TONS of visitors to that institution.)

No, I think the Nuremberg Zoo is going to get an entirely different kind of PR.

The missing cubs -- probably two of them -- MAY HAVE BEEN EATEN BY THEIR MOTHER, Vilma, DPA said. A second polar bear at the zoo, Vera, also had cubs recently and they may still be healthy, the agency said. To avoid disturbing them, no one has entered the bears' caves and it is not known how many baby bears were born, though sounds suggest each mother gave birth to two, DPA said.

Vilma, one of the young female polar bear mothers in Nuremberg, has today been visited by her favorite keeper in her cave for the first time since she gave birth to an unknown number of cubs. The keeper could not locate any of the cubs. Vilma was a little nervous, but well-fed and she appeared not to be hungry.