Only VOLUNTARY Regulation for American Zoos 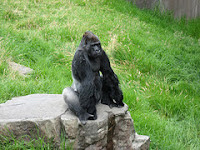 We in the US hate anything that has to do with government regulation. Anything. That is why we have so many voluntary, self-regulating industries. The problem with self-regulating, though, is the "self" part.

Even though I think that the panic over possible zoo attacks on the street is excessive, I think that this article (in a Chinese media source of all places!) has some important information.

1. U.S. federal and state officials say there is no way to know how many animals escape from zoos every year because no single agency tracks the incidents.

2. While some local governments may require zoos to report such incidents, it is a peace meal system that prevents any nationwide review of whether there are widespread patterns or problems in the industry.

3. U.S. lawmakers so far have left much of any establishment of zoo industry standards and accreditation to the non-profit Association of Zoos and Aquariums (AZA), whose recommendations are strictly voluntary.

4. The main zoo oversight association AZA does not release records of zoo escapes, and zoos are only required to report to the association incidents that result in injuries.

Photo by CFSprojecting.
Posted by Ana at 5:55 PM