Navy to Kill Coyote in Discovery Park in Seattle 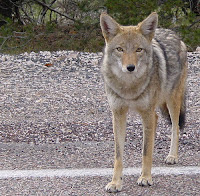 This is just wrong.

Less than one week after the city of Seattle intervened to remove coyote traps from Discovery Park, a plan is afoot to kill the animal.

The Navy, concerned about the safety of residents in military housing within the park, has made a decision to have the coyote "euthanized," said Rick Huling, spokesman for Naval Station Everett.

He would not specify a time frame or manner of killing, but area residents have been mobilizing to look for a "shooter" in the park.

"We got an anonymous tip that they are going to shoot the coyote," said Julia Allen, a retired veterinarian, who is on the board of Friends of Discovery Park. She is urging anyone who spots someone with a firearm in the park to call the police.

Safety of residents? I can see Discovery Park from my backyard. Unless you leave a baby on your back deck unattended and soaked in beef broth, I seriously doubt any human beings are in any danger. It's a coyote for crying out loud. Can't the animal be moved somewhere else?

UPDATE - Now they appear to be holding off on that decision for the moment.

Photo by Emdot
Posted by mrbarky at 12:23 AM

Coyotes are pests, don't tell me we are just encroaching on their environment. When they kill or injure pets and are bold and fearless then you are asking for problems. These are not cute fuzzy animals they are peerless predators.