I For One Welcome Our New Animal-Human Hybrid Overlords 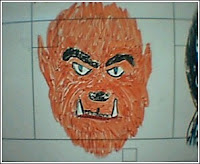 A Republican and a Democrat in the U.S. Senate have combined their efforts once again in an attempt to prevent unethical research involving human-animal hybrid embryos.

Sens. Sam Brownback, R.-Kan., and Mary Landrieu, D.-La., have renewed their call for a ban on the creation of human-animal hybrids after a British agency approved such research. The senators had introduced the Human-animal Hybrid Prohibition Act, S. 2358, in mid-November.

Here's the text of the legislation.

If this thing passes, I would suggest you leave your small child to be raised by wolves. I know, it's not a real wolf-boy, but it will have to do. Woof!

Photo and Art Direction by I'm Fantastic
Posted by mrbarky at 6:02 PM

Future Inheritance of Acquired Characteristics [News Poem, March 13, 2010]
http://toylit.blogspot.com/2010/03/future-inheritance-of-acquired.html
“A bill working its way through the state Legislature sounds like a science-fiction novel, with its wording to prevent the creation of "human-animal hybrids."”
–Alia Beard Rau, The Arizona Republic, Mar. 13, 2010 12:00 AM

A copse of trees applauds the sun on Mars.
The equatorial committees plan
To rise up early, drive to dawn in cars,
And shake the hands of voters—every fan.
The enemy has yet to fully blot
The rays of life, so public worship-rites
Combined with polls and military plots
Are prudent countermeasures in this fight
Against a beast with whiskers, tail, and fur.
They mine the first three planets—horde the sun—
And claim we share an origin—a spur.
The alien's hypothesis, we shun:
They call it history and claim from Earth
We both evolved—a lie that lacks face worth.