Association of Zoos and Aquariums Should be Evaluated 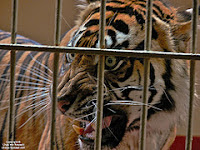 This article is from about a week ago and it talks about how inspectors from the Association of Zoos and Aquariums (AZA) will be visiting the now infamous San Francisco Zoo. But what drew my attention was the discussion about the AZA itself and how effective, or ineffective, it really is as a monitoring group.

Advocates call the organization a sophisticated support network helping to save species that might otherwise become extinct. Critics describe it as an old boys' club that wields tremendous power over zoos yet is often ineffectual....

"I was very deeply involved with the AZA," Schobert said. "But I became disenchantedas the organization changed. It was an opportunity for many of us in the dark ages to compare notes and get to know people face to face. There are a lot more women now, but it's still the old boys' club. If you have a reputation for being a maverick, you'll never see your name surface as being a director."

Although zoos have made great advances in nutrition and veterinary medicine, Schobert said, concern for animal welfare has decreased as preoccupation with species survival has grown.

"The AZA tries to position itself as the No. 1 conservation organization in the United States, but they're entertainment-oriented - getting people through the gate has been the main focus of zoos," he said. "Their priorities are wrong. Zoo directors will probably say they're not so concerned with individual animals as with the species. That sounds really lofty until you break it down: The species is made up of individual animals..."

Nine zoos have lost accreditation in the past five years including the New York State Zoo, the Tracy Aviary in Utah, the Lake Superior Zoo in Minnesota and Boston's New England Aquarium, which regained its status in 2006.

However, while the AZA accredits zoos and aquariums, it does not REGULATE them. That duty belongs to the US Department of Agriculture.

"The AZA is dictating to zoos what's in the best interest of zoos, but if these are important recommendations for standards, how come they're not mandatory?" Schobert asked. "Accrediting is not a bad idea, but the people doing the accrediting are peers from other zoos."